Why You Should Visit the Daintree Rainforest Right Now 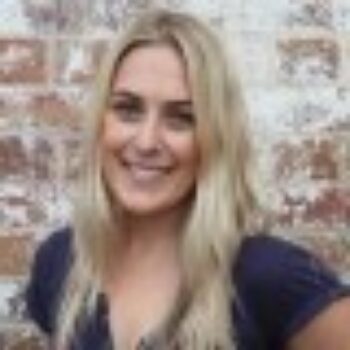 Our rainforests are more than just special places to explore – away from the daily grind, immersed in bird song and frog call, and dewy with mist and rain – they’re the living, breathing heart of the planet.

And in Australia, we’re blessed with many wonderful rainforests, despite being one of the driest continents in the world.

None are as old, or as majestic, though than the Daintree Rainforest. UNESCO World Heritage-listed since 1988 and part of the Wet Tropics, the Daintree is tens of millions of years older than the Amazon Rainforest.

It’s a living museum of evolution and home of the Kuku Yalanji indigenous custodians. A place where incredible plant and animal life survives in its own ecosystem – an ecosystem that originated when Australia was still part of Gondwana. Just look at the cassowary if you want proof that dinosaurs roamed our earth!

While many people think the Daintree warrants only a day trip from nearby Port Douglas, stay a few days and the secrets of the rainforest really open up to you. But be warned: with so many things to do in Cape Tribulation and the Daintree Rainforest, the longer you stay, the harder you’ll find it to tear away. It’s little wonder then that David Attenborough called it, “the most extraordinary place on earth”.

YOU CAN SPOT CROCS! 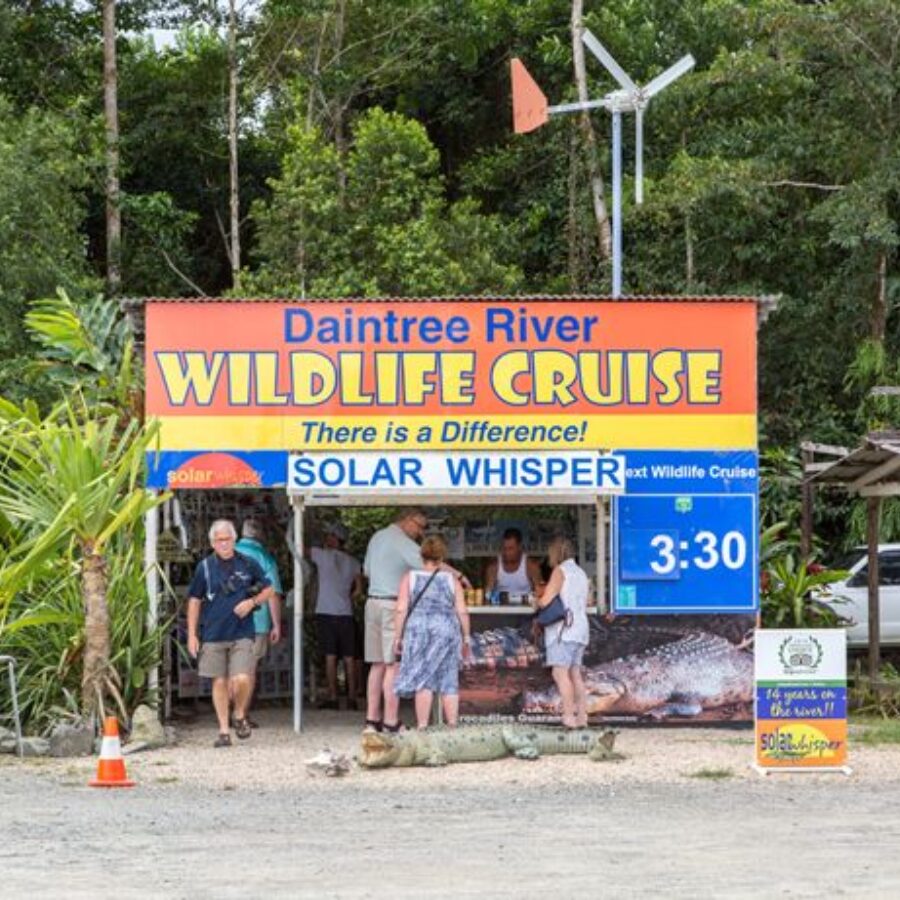 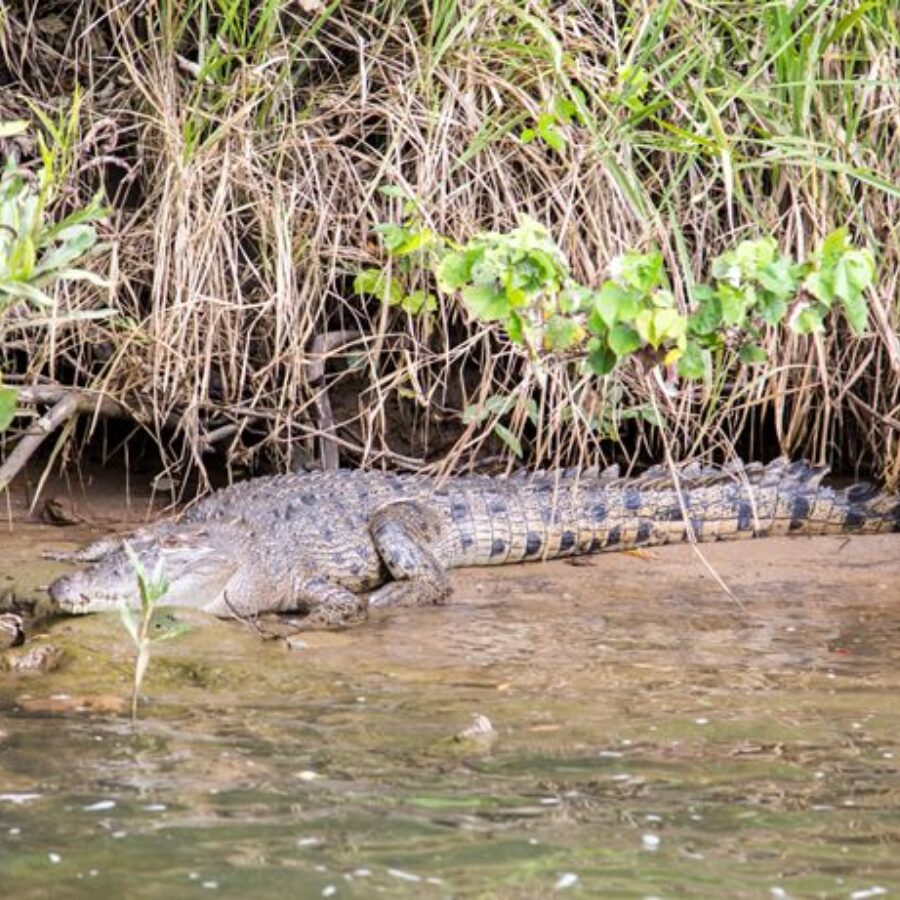 Okay, so most people who head to Tropical North Queensland are going to harbour a not-all-that-irrational fear of crocodiles. One of the best ways to spot them, safely, is on the aptly-named Solar Whisper boat cruise.

Cruising six times daily along the Daintree River, these guys know the local crocs like neighbours. During the one-hour cruise you’ll soak up the peacefulness of this beautiful river and keep a keen eye on the mangroves and sandy river banks for the chance to spot them.

“People think I’m mad when I say ‘cute’ and ‘crocodile’ in the same sentence,” our guide Nick says. “You can make up your own mind folks, but I reckon that’s cute as.” We’re about two minutes into the cruise and we’ve spotted a baby croc clinging to a branch just above the water.

Even though female crocodiles lay 50 eggs on average, only 1% of babies will make it past two years, so we send our good luck vibes this one’s way.

A little further along we meet a much larger male called Scooter, settled on a sunny bank with no sign of life besides an ever-so-slight flicker of his eyes. Nick tells us he has 80 teeth, the closing muscles on his jaw are three times more powerful than T-Rex, and once he’s over two years old, he’ll only have to eat once a month or every six weeks so energy preservation is key. “They’re not lazy, they’re just very efficient,” he says.

Winter is the best time for spotting crocs, otherwise, plan your tour time to coincide with low tide. And, of course, keep the croc spotting for inside the boat.

“I’ve got a bit of a deal with the crocodiles,” Nick says. “I don’t get in the water and they don’t come in the pub.”

SPA TREATMENTS ARE THAT MUCH BETTER IN THE RAINFOREST 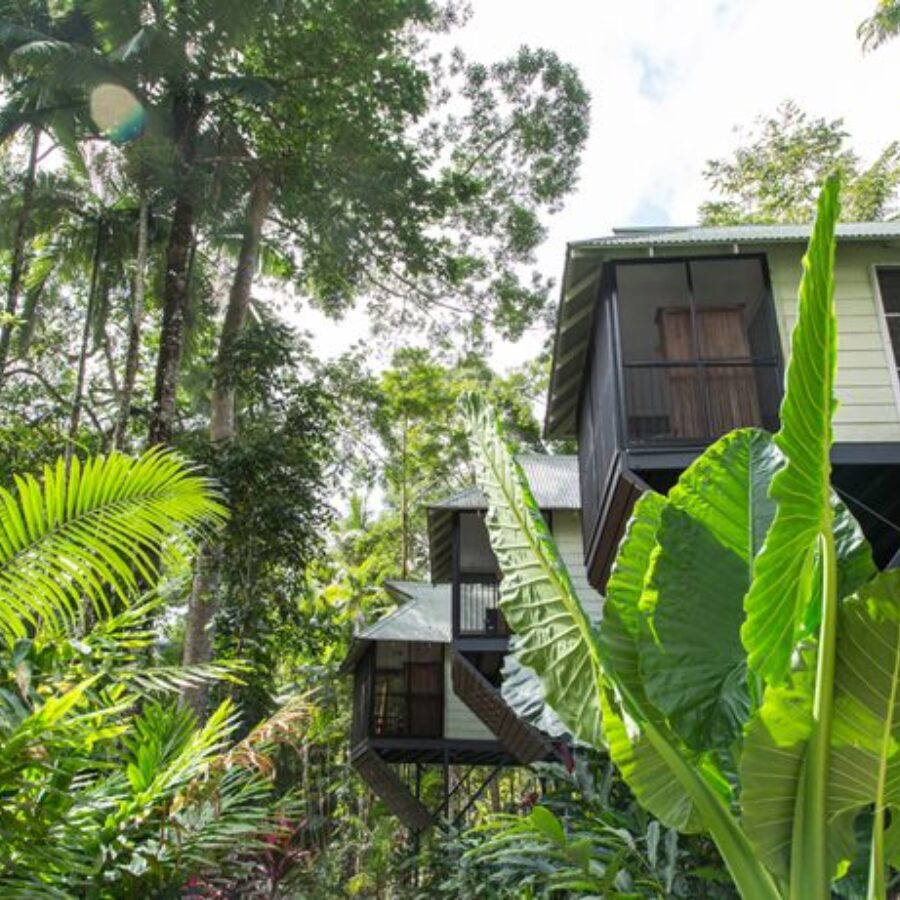 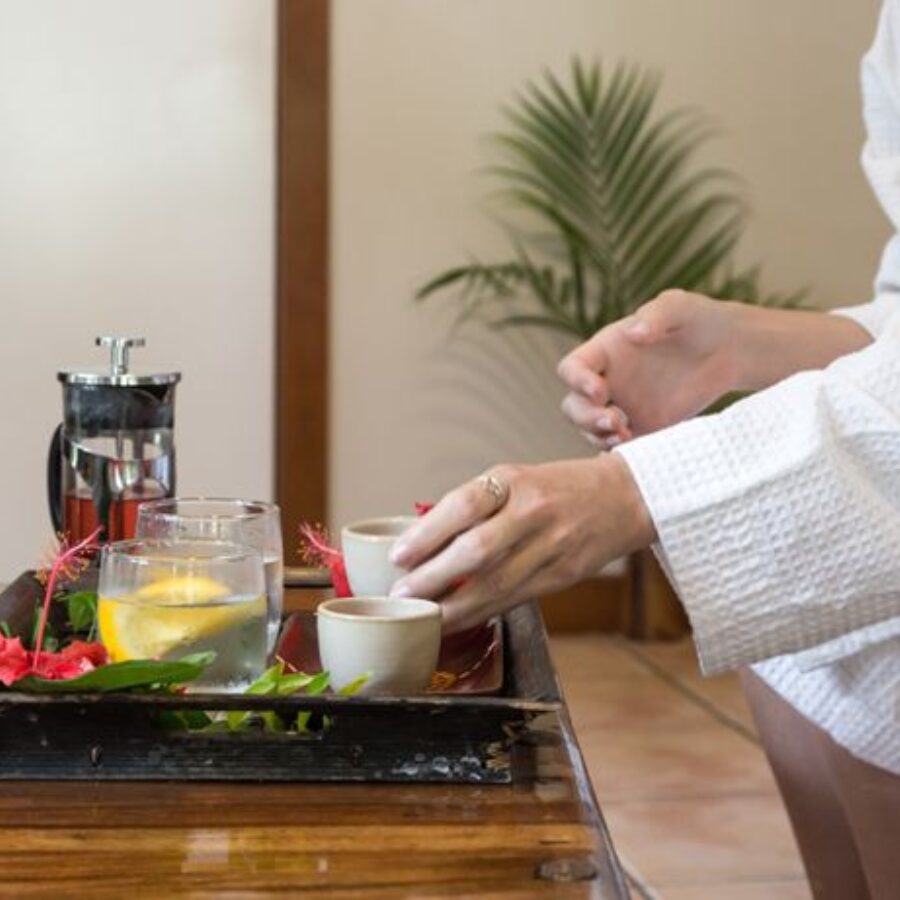 As if the Daintree Rainforest wasn’t peaceful enough on its own, at Daintree Eco Lodge and Spa you can really take things next level.

With approval from the Kuku Yalanji elders, the spa treatments at the Daintree Wellness Spa integrate the wisdom of ancient Aboriginal culture, medicine and healing.

Any treatment here will be one to remember but the signature Walbul-Walbul (Wal-bull Wal-bull, meaning butterfly) treatment starts with a smudging to clear any bad energy before transporting you through a full body exfoliation, ochre mud wrap, and Vichy shower that moves in waves across your body like a harmonious fan dance performed by a Japanese Geisha.

Then, once you’re suitably mushy and relaxed, a one-hour full body massage to the natural soundtrack of the rainforest outside will ensure any stress of your everyday life is long forgotten.

All treatments at the spa use Li’tya products, which are created with sustainably wild harvested Australian botanicals and based on the principles of modern and Indigenous herbalism, aromatherapy and touch therapy.

THE DAINTREE IS THE HUB OF EPIC LOCAL PRODUCE 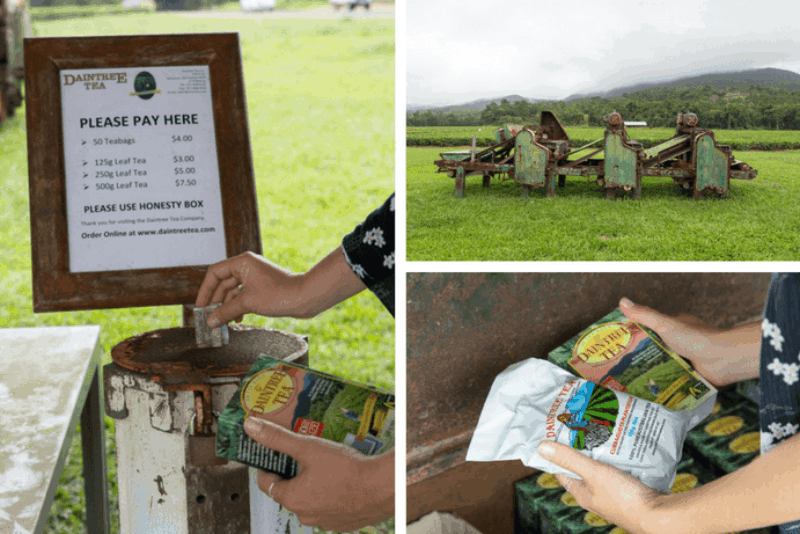 More than just a selection of pretty roadside stops or Instagram opportunities, the Daintree is literally teeming with tasty treats. The Daintree Food Trail is a celebration of produce and the people who make it. The downloadable map will guide you through this amazing gastronomic landscape, showcasing the producers telling their stories of fruits and foods you may never have seen before. 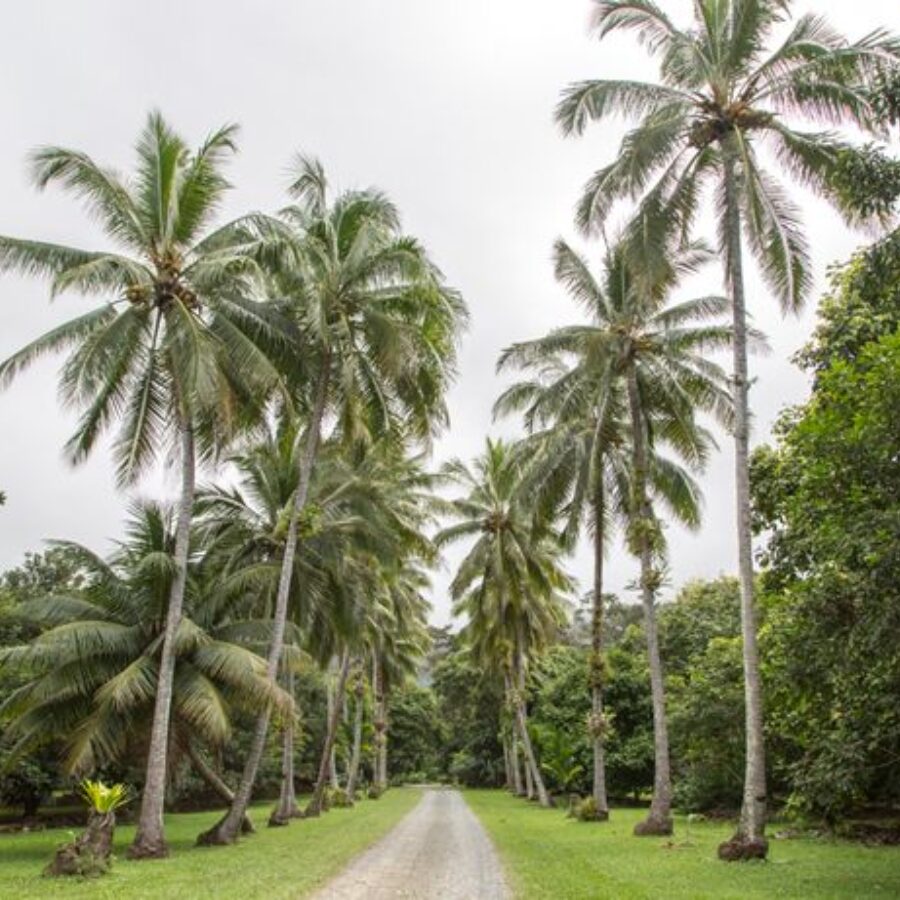 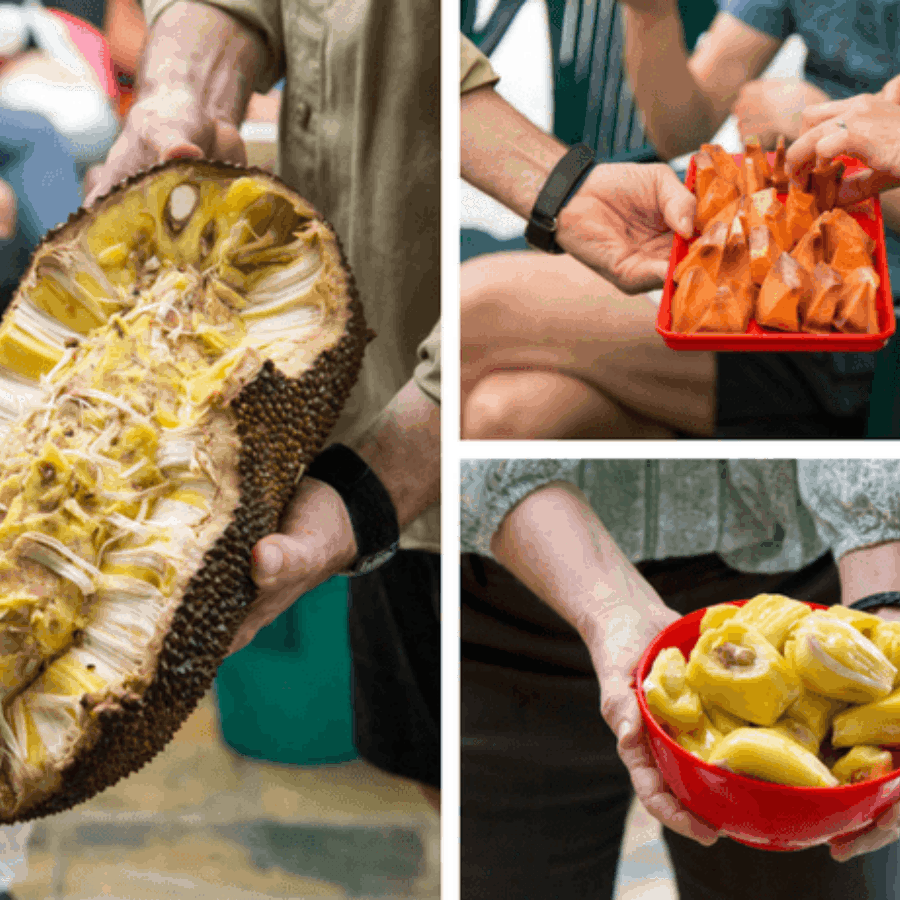 With such a tropical climate and abundance of rainforest, tropical fruits from all around the world thrive in the Daintree.

At Cape Trib Farm you can join in a fruit tasting and farm tour every Monday, Wednesday, Friday, Saturday and Sunday at 2pm.

Owners Jeremy and Merryn showcase a selection of 10 or 11 fruits from their tropical fruit orchard, which grows over 60 varieties. We start with breadfruit fried crisp like chips, then yellow mangosteen is passed around. It’s really tangy with flesh like a mango.

Things start to take a turn for the interesting with the purple star apple’s jelly-like consistency and the pumpkin-pie flavour of the mami sapote.

Then, Jeremy holds up a whopper of a Jackfruit. “We had one last year that was 30kg,” he says. “But they can grow up to 50kg.” Merryn passes around a bowl filled with segments called aril. With firm flesh, the fruit is great in curries and being related to the durian, it tastes better than it smells.

We try the soft, juicy and tart soursop, tannin-rich jaboticaba, and creamy yellow sapote, but everyone’s eyes light up when the black sapote – or chocolate pudding fruit – comes out. It’s creamy, chocolatey flavour is enhanced with some homemade ice-blocks the couple has whipped up with the help of some coconut milk powder and a squeeze of lime.

We end the tour by rubbing the small red bean-like miracle fruit all around the inside of our mouth and are blown away when we suck on a lime and taste incredible sweetness with no hint of sour. This fruit has been known to be used to help chemotherapy patients gain some taste back, and for diabetics to taste sweetness without the sugar.

THE RAINFOREST IS UNLIKE ANYWHERE ELSE ON EARTH 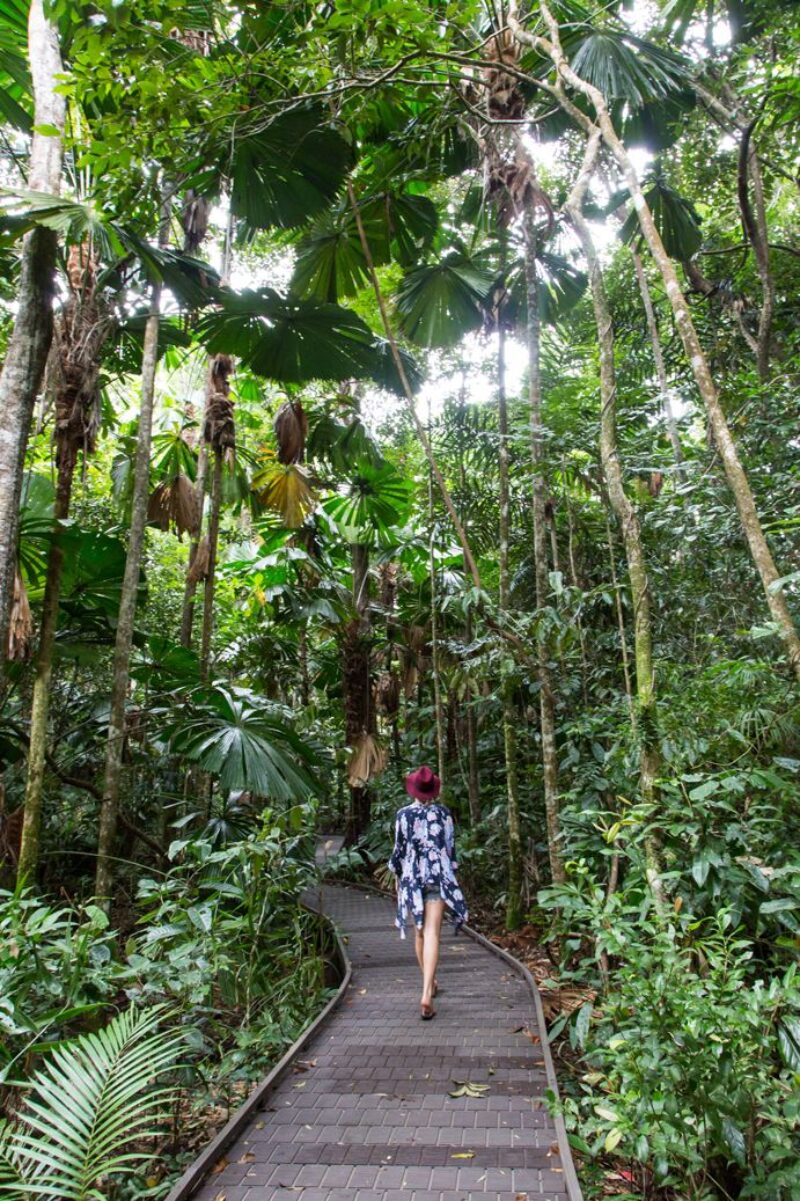 There are many ways you can experience the rainforest – sweeping views from hardcore hikes, relaxed drifting along the creeks and rivers, or cultural walks through the national park – but there are also several fantastic and accessible boardwalks dotted from Cow Bay up to Myall Beach.

The Dubuji Boardwalk provides a 1.2-kilometre meander under the shade of some truly spectacular, and rare, fan palms. Dubuji is a Kuku Yalanji word meaning ‘place of spirits’, and a walk along this boardwalk will have you feeling a deep connection with the forest around you.

It winds its way through the mangroves and over a small freshwater creek towards Myall Beach.

YOU CAN EAT KALE ICE-CREAM (AND IT TASTES AMAZING) 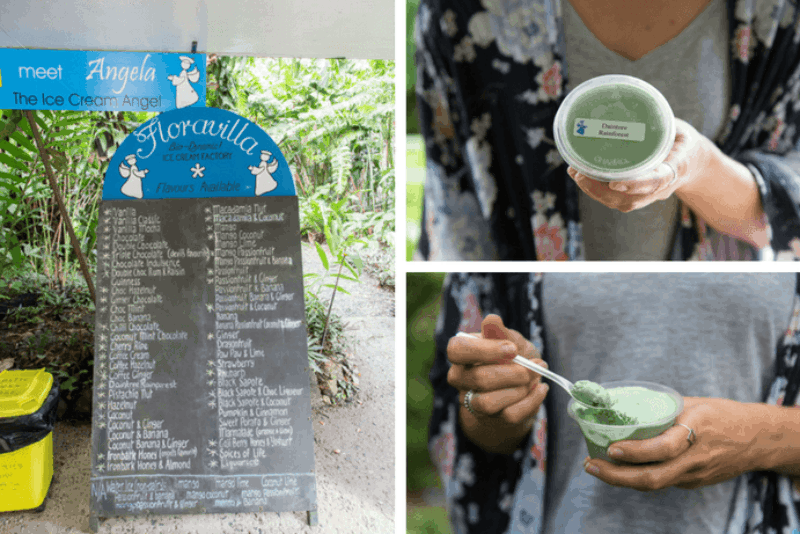 At Floravilla Ice Creamery, organically-grown tropical fruit and other local ingredients are blended in biodynamic milk sourced from the nearby Atherton Tablelands, to create a menu of 62 flavours.

Depending on the time of year you visit, you might be licking your lips with bright pink dragonfruit ice-cream, paw paw and lime, smooth and creamy black sapote or refreshing mango. They’ve got some less tropical flavours on offer too, if Guinness ice-cream or chilli chocolate is more your style. 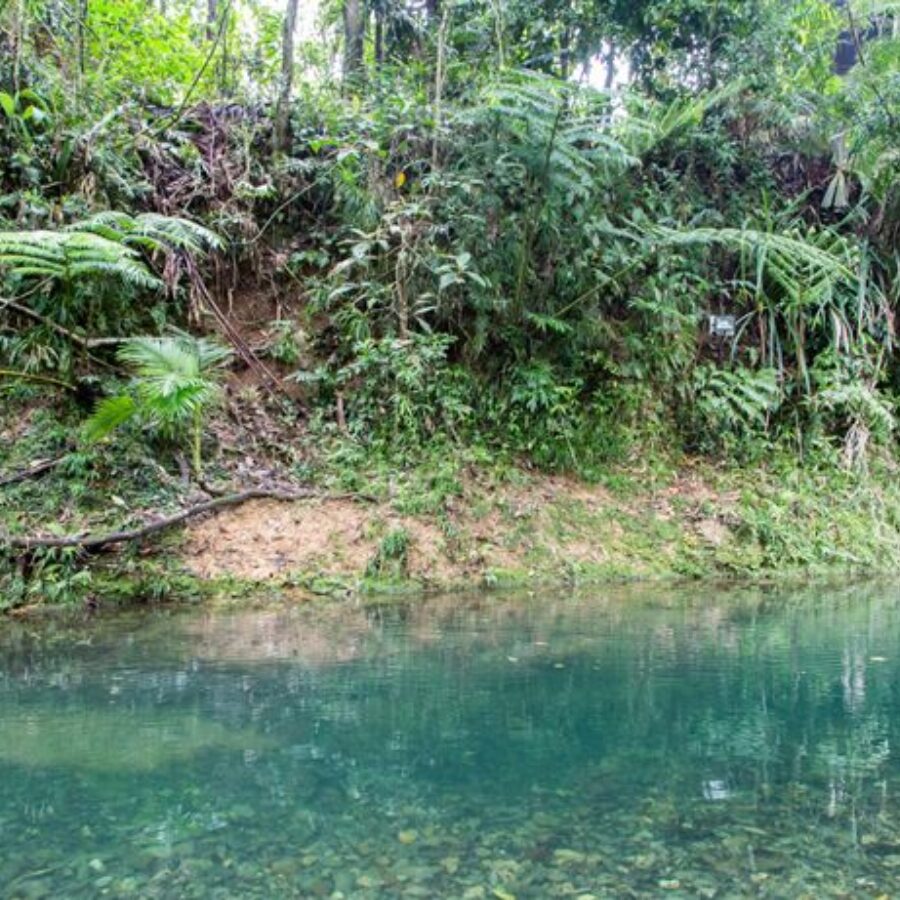 When there are crocs about, it pays to ask the locals about the best spots for a swim and always be croc wise. While this is croc country, there are also a number of stunning and very safe spots to swim.

Have lunch at Heritage Lodge and Spa and then spend the afternoon in their private (and safe) waterhole, famed for its glorious shade of turquoise. You’ll also find a swimming hole at Masons Cafe (admission by gold coin donation), as well as Hutchinson Creek and Emmagen Creek.

8 MORE THINGS TO DO IN THE DAINTREE:

This post was originally published on the Queensland Blog Living Luxe In The Daintree 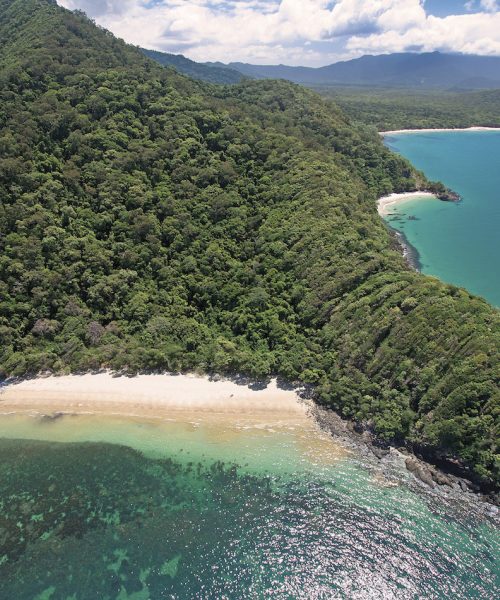 Top 10 Things to Put on Your Daintree To-Do List 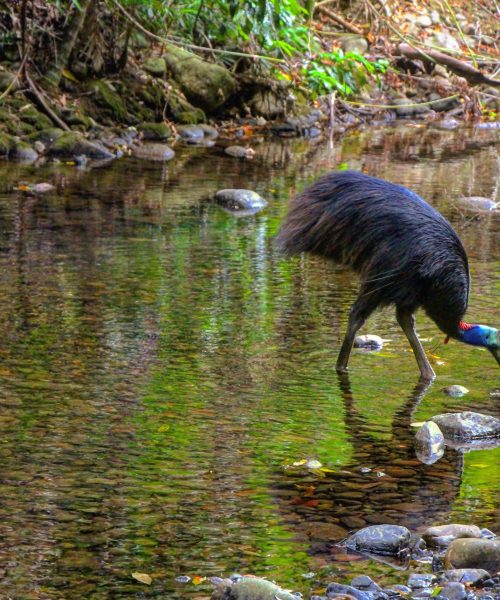 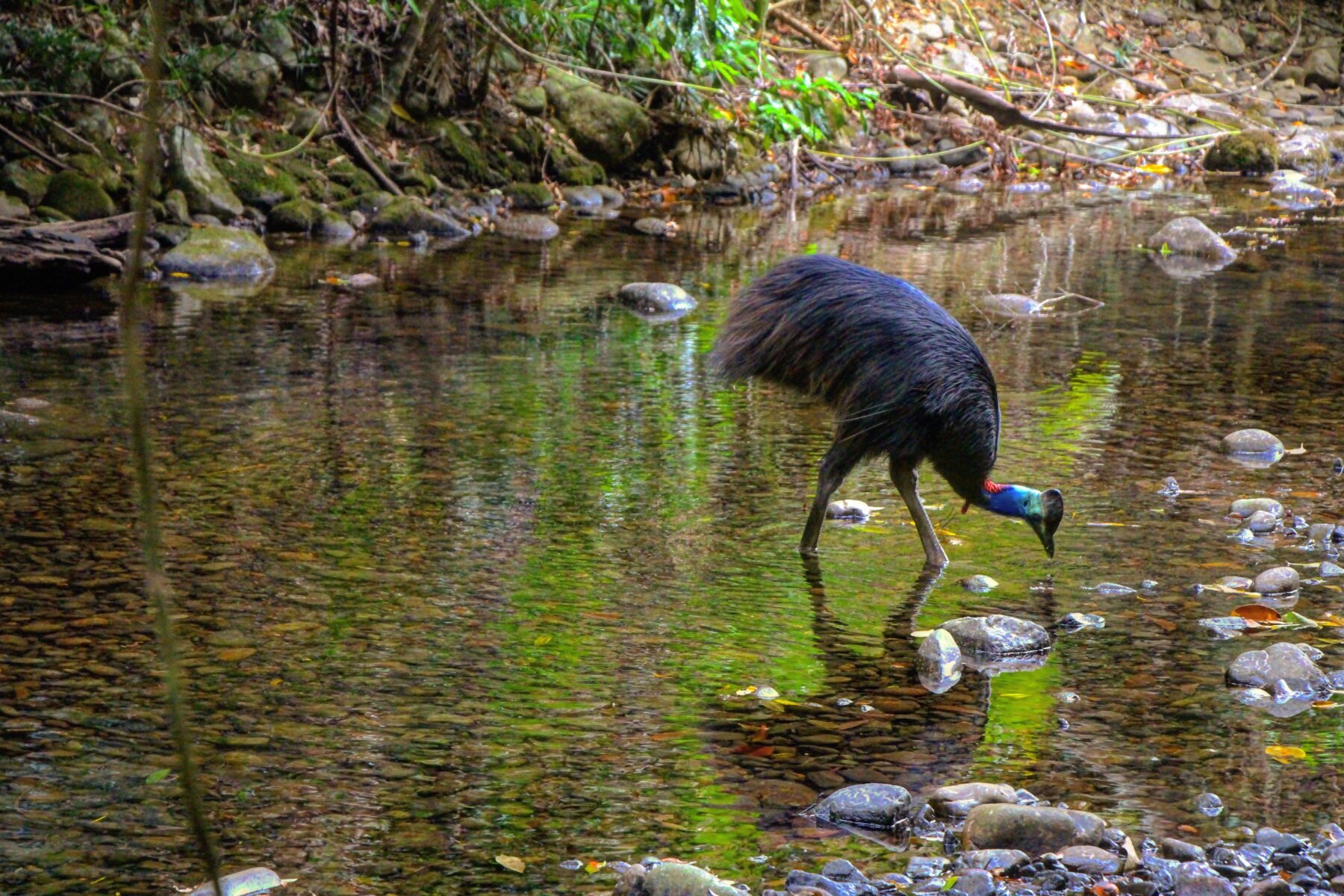 10 Daintree Rainforest Animals That Are Found Nowhere Else 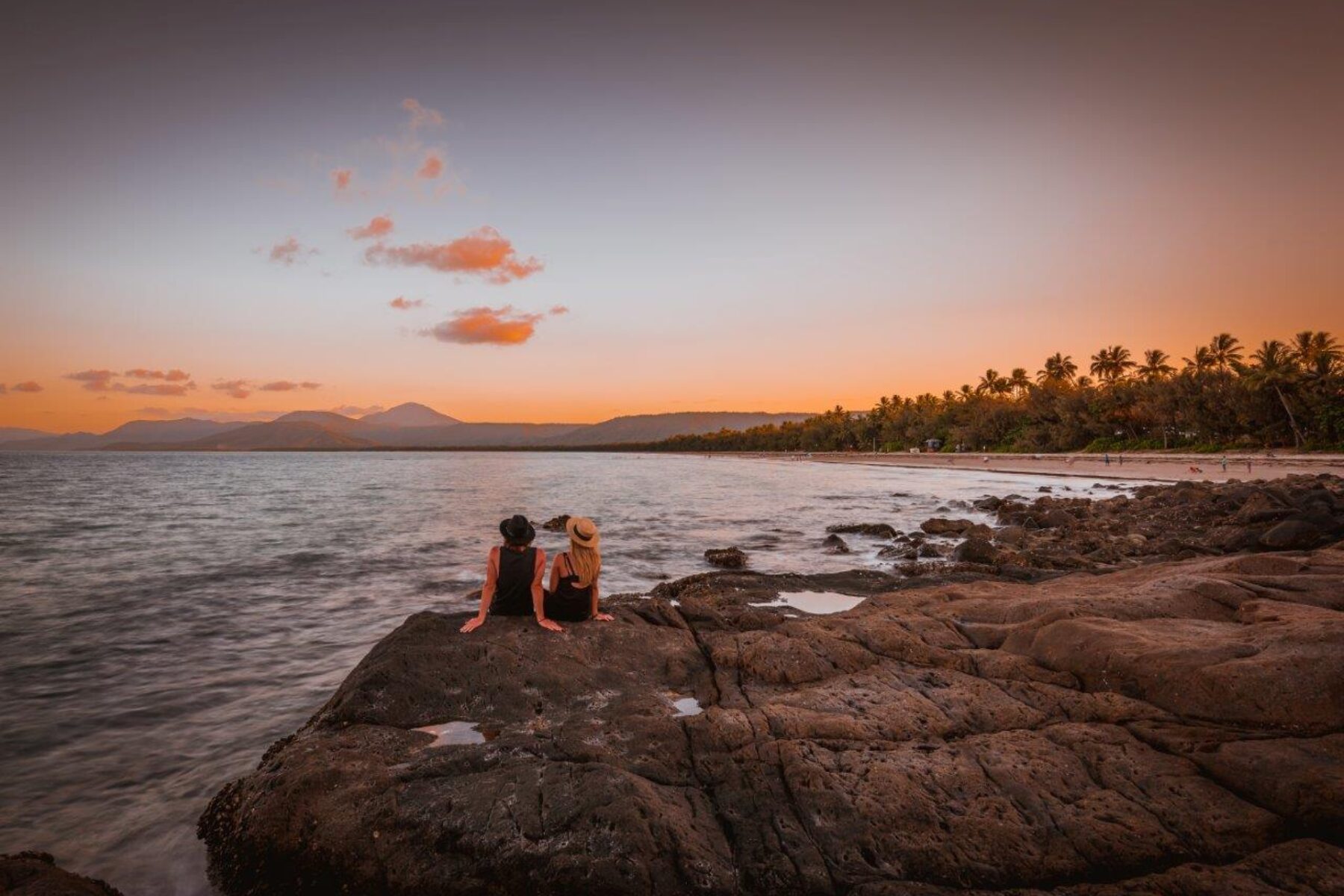 Safe Travel In The Time of COVID